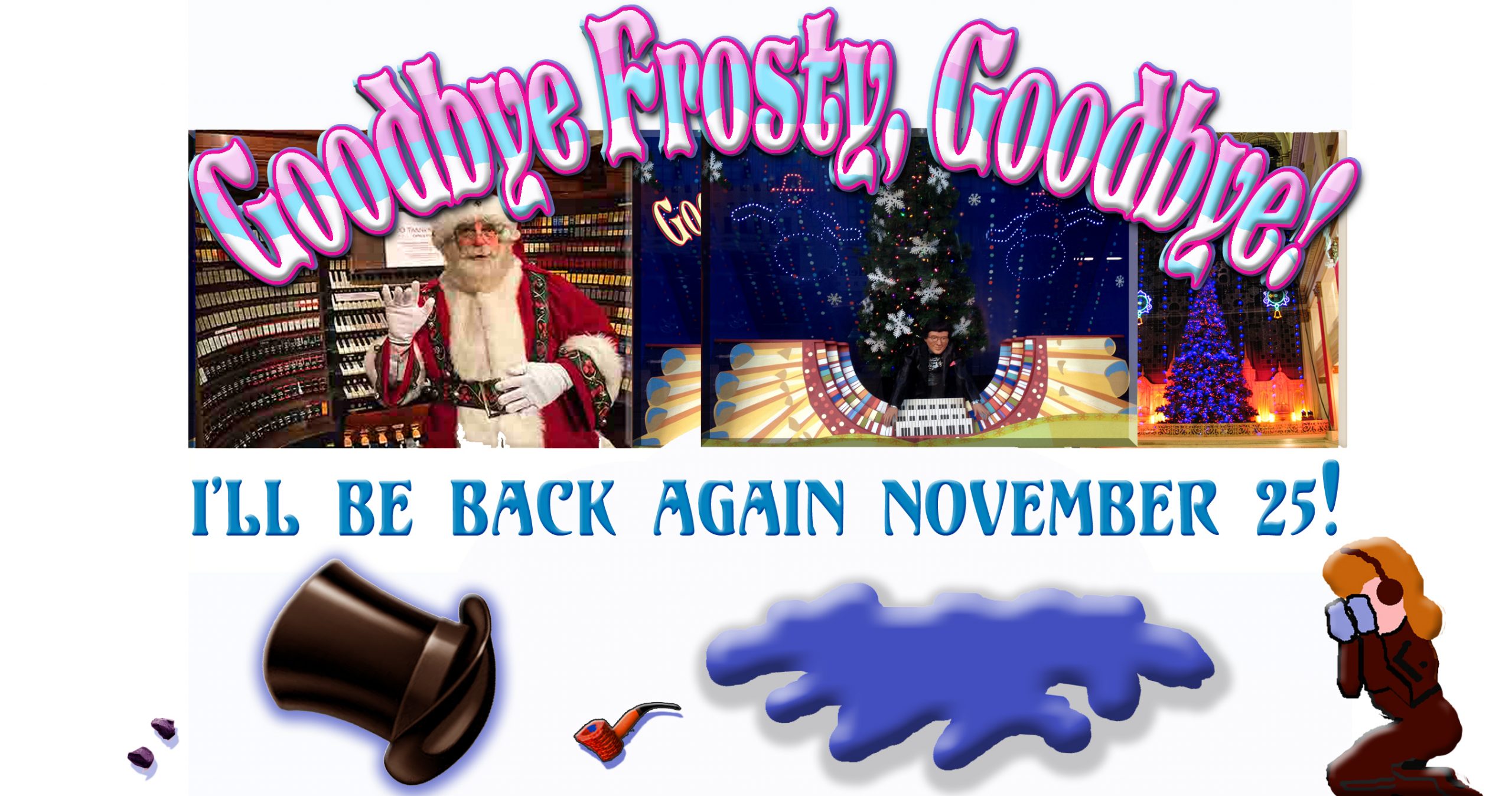 Dickens Christmas Village may be enjoyed virtually clicking below!

The Philadelphia Store wintered through 2020 with the Light Show displayed in its brilliant fullness each shopping day, but without the accompanying musical production. All of us look forward to 2021 and our Yule Attractions making a welcome return in their resplendent majesty.

Beautiful windows and holiday music grace the bustling Market Street street scene outside the Store. These attractions are built by the Macy’s Parade Studio and are definitely worth a detour! 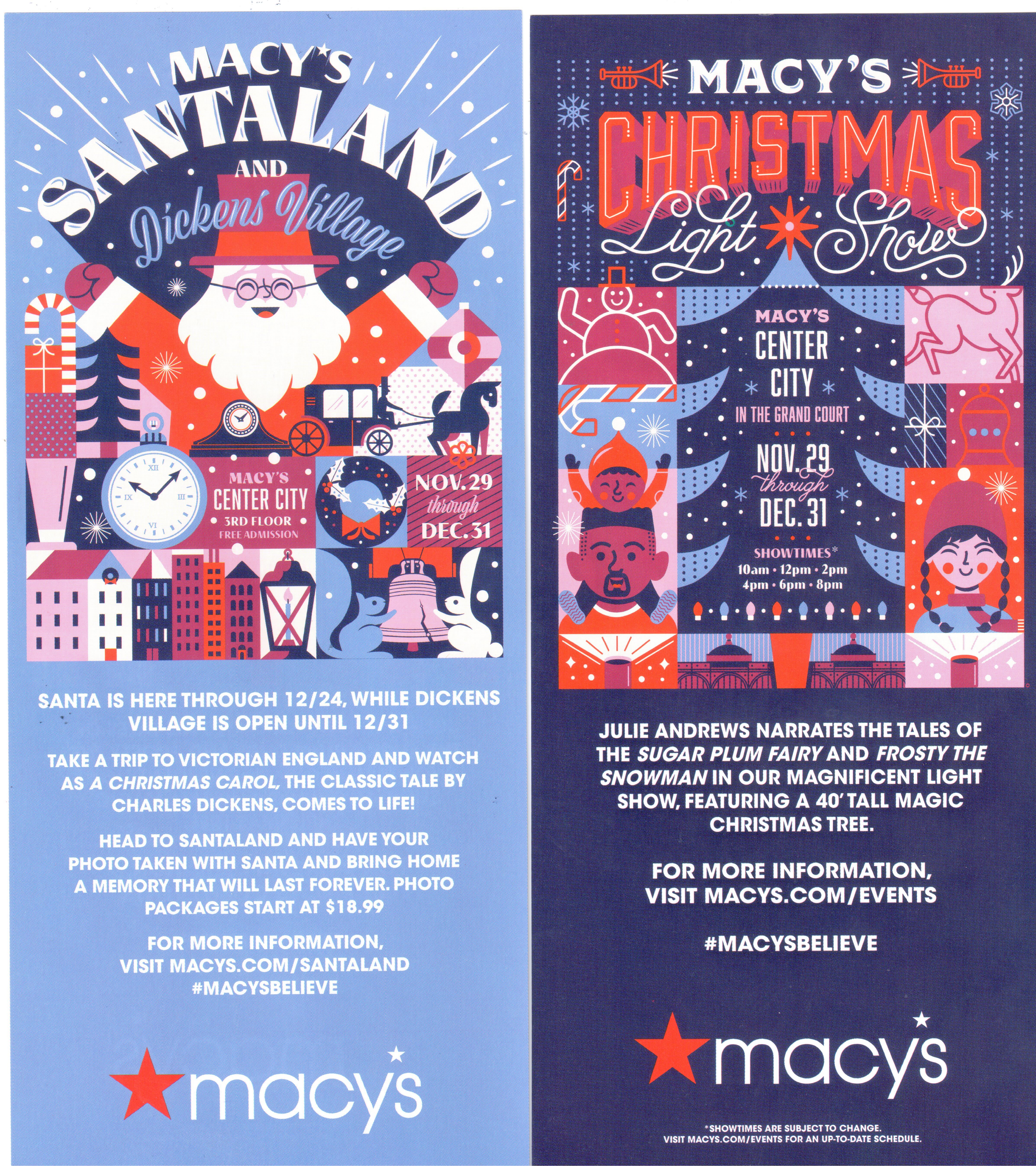 Macy’s is located inside The Wanamaker Building at 13th & Market Streets, Philadelphia, PA 19107. Basic store Information is at 215-241-9000. There is parking underneath the Store with lot entrances on Juniper and 13th Streets. (Note that since the pandemic the garage no longer generally fills to its former capacity, and slots can usually be found almost all the time, particularly on the lower level.)

PLANNING A LIGHT SHOW TRIP?  BE SURE TO SCROLL DOWN FOR LOTS OF HELPFUL INFORMATION!

Shoppers waiting for the next show will want to take in the Dickens Christmas Village on the Third Floor, Market Street, which is also free and is open on a continuous basis. However, reservations are required five days in advance, and shoppers may register in advance at the Macy’s Santaland website HERE. The Light Show itself lasts about eleven minutes. Buying Wanamaker Organ items from the Friends of the Wanamaker Organ webstore helps support the Organ as you fulfill your holiday gift list. Just click on the link below!Immediate Direct Shipping!

The Macy’s presentations are the grandest of Philadelphia traditions, and many customers’ Yule celebrations would not be complete without taking in the Delaware Valley spectacle.Macy’s beautiful Market Street Windows, created by the Parade Studio, are also a special attraction. They are usually unveiled the Saturday before Thanksgiving.

At the Dickens Christmas Village (Third Floor Market Street) there is also a concession for photos with Santa (open through Christmas Eve), a studio to design a personalized teddy bear, and a Christmas gift shop (“Holiday Lane”) nearby. There is covered public parking under the Wanamaker Building with elevators leading to Street Level.

THE WANAMAKER ORGAN is used for the finale of the noon Light Show (except Sundays), and at the end of the 6 pm Light Shows (except Wednesday, Friday and Sunday). Recorded Wanamaker Organ versions conclude the show at all other times. 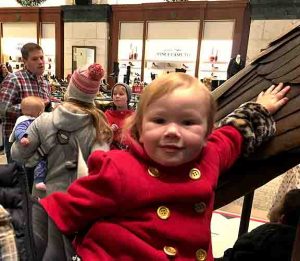 The Wanamaker Organ is played daily (except Sundays) at noon. It is also played on Monday, Tuesday, Thursday and Saturday at 5:30 pm, and each Wednesday and Friday at 7pm. Note: this is the regular yearly schedule.
In years when Macy’s schedules the Wanamaker Organ with the Light Show, it features the Grand Finale (“Deck the Halls”) of the Light Show, then the daily recital continues. Other Light Show endings feature a taped finale by the Wanamaker Organ. All Organ recitals are 45 minutes long. The majestic Wanamaker Organ is the largest playing pipe organ in the world and has more than 28,677 pipes. Through the Friends of the Wanamaker Organ and Macy’s, several million dollars have been invested in its matchless sound during the ongoing restoration.
VIEW THE original Light Show here, and here, and see a vintage TV segment with organ here.
KEEP SCROLLING DOWN for Exciting Light Show History Features and Photos!
CHECK OUT our  Yuletide webstore!
Christmas Eve and New Year’s Eve Alert

Christmas Eve day and New Year’s Eve day the second of the Wanamaker Organ daily concerts are generally cancelled due to potential curtailed store hours and to accommodate the personal needs of the Organ staff.

MEALS, LODGING, NEARBY ATTRACTIONS, TIPS AND OTHER USEFUL INFORMATION IS HERE. Covered parking is available under the Wanamaker Building, but additional options are here. Read the fascinating story of Bert Medland, father of the Magic Christmas Tree here. An annotated bibliography by Adrianna Riccioni tracing the history of the Light Show is here. Our Philadelphia Visitors Guide is here. Escalators are located […]

Retailers have always kept the Light Show up-to-date, and the latest version, produced by Macy’s, is no exception. While retaining all the beloved elements of the John Wanamaker original, the revamped production —  dubbed the Millennium Edition by designer Larry Kerecman — modernizes the equipment while allowing the Grand Organ to cast its holiday spell. […]

As far as the Wanamaker Organ was concerned, the main problem with past Christmas shows was that the instrument was covered by a huge theater curtain, muffling the Organ’s sound and robbing the hall of reverberation. Until the Grand Court was repainted for the American Bicentennial in 1976, this sound-deadening continued throughout the year as […]

Fun Facts and Figures Past and Present There are 34,500 LED lights on the Macy’s Magic Christmas Tree in six colors: red, yellow, green, blue, purple, and cool white, which breaks down to about 5,750 lights in each color. It is topped by a red Moravian (or Advent) star. The lights on the tree, the […]

The Store’s famous light show has always been one of Philadelphia’s most hallowed traditions since its inception in November 1955. It was devised by Frederick Yost, a Yale University theatre-lighting graduate who came to John Wanamaker and pioneered many of the beautiful Grand Court displays that kept the store in the forefront of retailing. Yost […]

During the 1960s various panels of figures set on plywood panels, were added, based on a narrative similar to that used today. Mrs. Yost’s voice was used for the Sugar Plum Fairy. The stentorian voice of legendary Philadelphia WCAU-TV newsman John Facenda, voice of NFL Films, added a powerful note of authority. Over the years […]

Characters in Use Today

Macy’s acquired the celebrated Dickens Christmas Village from Philadelphia’s Strawbridge & Clothier Department Store. Numerous animated figures depict scenes in Dickens’  “A Christmas Carol” (1843). While not as popular as the Wanamaker Light Show, the village drew customers to the fourth floor Strawbridge’s, and on one occasion a Dickens descendant presided at the season opening. […]

Macy’s has also enlivened Market Street with a series of fanciful windows spreading holiday cheer to the sidewalks. Festive holiday music from sidewalk speakers adds to the enchantment of this grand old department store tradition.

During the off-season the show is stored in the passageways around the Organ, making the area look like Santa’s workshop. The Magic Christmas Tree is kept on the second floor, Chestnut Street, behind the ladies suit department. The branches are hung from trusses in the ceiling and the endpoints are color-coded for easy installation on […]