Support the Friends of
The Wanamaker Organ

THE WANAMAKER GRAND ORGAN now at MACY’S has been thrilling Philadelphia shoppers and visitors every business day since 1911. Eighty years later, in the fall of 1991, an organization of the Friends Society was formed to support the preservation and musical mission of this irreplaceable American treasure.

About the Grand Court Organ

Built by the Los Angeles Art Organ Company for the 1904 St. Louis World’s Fair, the Wanamaker Organ was designed by renowned organ architect George Ashdown Audsley, author of The Art of Organ-Building. This heroic instrument had more than 10,000 pipes, and its construction was on such a lavish scale that costs soared to $105,000, bankrupting the builder. 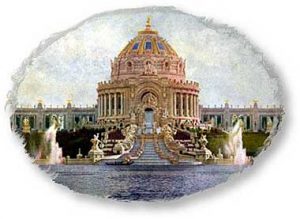 In 1909, Philadelphia merchant-prince John Wanamaker bought the instrument for his new Philadelphia emporium. Thirteen freight cars were required to ship the entire organ from St. Louis, and installation took two years. The Grand Organ was first heard in the Store’s seven-story atrium on June 22, 1911, at the exact moment when England’s King George V was crowned at Westminster Abbey. Later that year, it was prominently featured when President William Howard Taft dedicated the Store.

Despite its immense size, the tone was judged inadequate to fill the huge court. Wanamaker’s opened a private pipe-organ factory in the Store attic, employing up to 40 full-time employees to enlarge the instrument. William Boone Fleming, the original factory supervisor, was hired to direct the work. Lavish construction and elegant workmanship made the Wanamaker Organ both a tonal wonder and a monument to superb craftsmanship. The largest pipe is made of flawless Oregon sugar-pine three inches thick and more than 32 feet long—so large that a Shetland Pony was once posed inside for publicity photos. 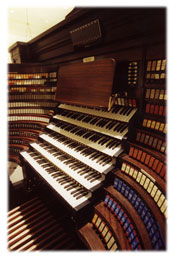 Commanding these huge resources is a massive console with six ivory keyboards and 729 color-coded stop tablets. There are 168 piston buttons under the keyboards and 42 foot controls. The console weighs 2.5 tons; the entire instrument weighs 287 tons.

During the lifetimes of John Wanamaker and his son Rodman, the world’s finest musicians were brought to the Store for brilliant after-business-hours concerts, among them France’s Marcel Dupre, Louis Vierne and Nadia Boulanger, Italy’s Fernando Germani and Marco Enrico Bossi, and England’s Alfred Hollins.

At a 1919 Musicians’ Assembly, virtuoso Charles M. Courboin, in association with Leopold Stokowski and the Philadelphia Orchestra, performed before a standing-room-only crowd of 15,000. Since then, great organists have continued to perform at the Store, many making special pilgrimages.

In 1986, the evening-concert tradition was continued as the Grand Organ marked its 75th anniversary with a Keith Chapman recital that attracted a huge audience. More recently, elaborate music events have regularly been sponsored by the Friends of the Wanamaker Organ, attracting visitors to Macy’s with representatives from all parts of the U.S.  In 2008 Macy’s celebrated its 150th anniversary with a Philadelphia Orchestra concert under Maestro Rossen Milanov. At the Wanamaker Organ, Peter Richard Conte performed Joseph Jongen’s Symphonie Concertante (1925) for the first time with the organ and orchestra for which it had been written.

Now a National Historic Landmark and valued in excess of $57 million, the Wanamaker Organ is of the American Symphonic design, which can play the great organ masterworks as well as the entire range of orchestral literature. The pipework encompasses the resources of three symphony orchestras; its String Organ alone has 7,000 pipes.

Friends of the
Wanamaker Organ, Inc.

Friends of the Wanamaker Organ is a world-wide group of sponsors and supporters formed to encourage the preservation and musical mission of this National Historic Landmark. Introductory contributions of $20 entitle the donor to become a Friend and to receive four issues of The Stentor, the Society’s quarterly historical newsletter and restoration update. Added tax-deductible donations support Friends programs. Join the Friends now!

The official registration and financial information of the Friends of the Wanamaker Organ, Inc., may be obtained from the Pennsylvania Department of State by calling toll-free within Pennsylvania, 1-800-732-0999. Registration does not imply endorsement. 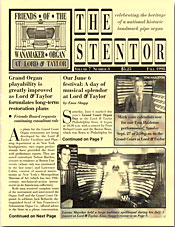 E-Mail the Friends
VIEW a spread

The Stentor is published in the Spring, Summer, Fall and Winter, with all renewals taking place at the beginning of the new year. The minimum annual donation is $20 per year special rate for new members. Those joining in the middle of the calendar year who do not wish to receive that year’s back issues can pay just for the issues still to be published (at $5 apiece). Kindly make checks payable to Friends of the Wanamaker Organ.

Please enclose your check with a brief note or print-out or facsimile of the Order Form and mail to the:

With your support,
we are making a difference!