The Friends of the Wanamaker Organ-sponsored Symphonic Organ Restoration Symposium brings many of the Nation’s top pipe-organ restorers to Philadelphia for intense educational courses and workshops on fine the art of historic electropneumatic pipe-organ restoration. Top practitioners share the special techniques they have devised to keep the country’s great Symphonic pipe organs a vital presence on the American scene. 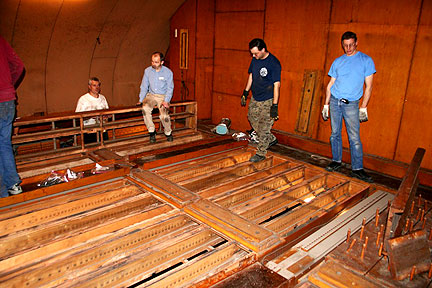 L. Curt Mangel, curator of the Wanamaker Organ and former curator of the famous Sanfilippo Collection of historic automated musical instruments in Barrington, Illinois, is the Symposium organizer. Evening and weekend educational field trips are occasionally included, taking participants to prominent pipe-organ and related sites in the greater Philadelphia area. 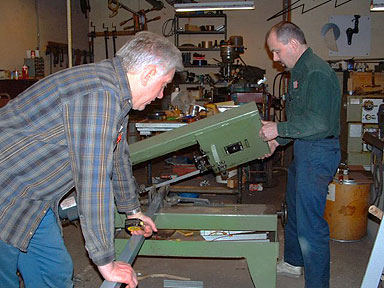 Below is a partial list of restoration milestones. This page is still under construction and is by no means a complete list, nor does it cover numberless tunings and specific repairs, or the gifts of time and talent of many people. The material is presented in reverse chronological order to highlight the most recent accomplishments

Restoration details are covered in detail in the Friends of the Wanamaker Organ newsletter The Stentor, sent free to those who join and financially support the Friends.

Macy’s is shuttered amid Coronavirus pandemic beginning mid-March. The Store re-opens in early July to the sound of Wanamaker Organ music as Peter Richard Conte plays “America the Beautiful.” The Wanamaker Organ becomes one of the few venues in the country with live daily music.

Macy’s takes advantage of the pandemic to upgrade its escalator system.

Major work continues on the back chests of the Solo Division, the Solo mixtures, the Chinese Gong and the Pedal 10-rank mixture chest.

The CD/DVD Symphonic Splendor is released.

Friends member David Wanamaker funds the restoration of the Eagle base.

Major additions are made to the Friends’ AV system for concert streamcasts.

Plans are announced for a 32′ Contra Trombone extension of the Pedal Trombone.

Two virtual concerts are held: A Grand Halloween Concert and our Christmas in the Grand Tradition Concert.

Original String Division completed and its Soft Bourdon again made available on Pedal
Solo restoration continues with installation of reflective surface coatings and panels. Work begins on two mixtures at top of chamber.
Wanamaker Office Building lobby renovated with big-screen video featuring Wanamaker Organ and other subjects.
Live feed from console connected to giant-screen display.
Kiosk shows what happens inside the Organ when it is switched on at times when the Organ is actually switched on.
Wanamaker Organ Case and stage completely restored with gilding in 22-karat gold in a project that is the year’s major focus.
Chorus Third Diapason chest reinstalled in Chorus area following restoration.
Great unenclosed primary completely rebuilt.
Eagle is carefully and professionally polished.
Additional extensive re-actioning of Main Pedal.

Opus -Two relay system debuts to rave reviews. Installation in other divisions continues to present day. As part of the project, the Combination Action was expaned to 1000 levels, and a sequencer was installed to allow any piston to advance the settings to the next higher General Piston number. Opus 2 works by monitoring which stops or keys are on or off and sending the information digitally to receptors inside the organ, which interpret the information and send current through the appropriate wires to the magnets. If a stop doesn’t totally flip on or off mechanically, Opus-Two overrides this to conform with the organist’s wishes.
Chorus primary rebuilt. Some pipes returned to chests.
Ethereal Primary rebuilt.
Major work continues on Gongs with adjustments of mechanism by Sam Whitcraft.
Diapason Magna pipes cleaned.
Intricate console balcony metalwork panels refinished.
Daniel Angerstein does Chorus voicing on a division that was never really finished.
Chorus primary rebuilt.

A harp is donated by Brantley A. Duddy, restored, and placed in the Enclosed Great/Choir expression chamber.
The Major Chimes receive an overhaul.
Federated Department Stores announces plans to merge with the May Department Stores Co.
Philadelphia Preservation Alliance honors the Wanamaker Organ Restoration.
Great Harmonic Flutes,Solo Soft Tuba  and  String Violin Diapason restored. Store is cleared of all fixtures and merchandise as Lord & Taylor vacates. Organ has amazing reverberation from bare marble floors and walls and with clothing absent.

Wanamaker Organ honored during 100th anniversary of St. Louis World’s Fair.
Great Chorus grate valve restored.
Solo Soft Tuba restored by Samuel Hughes, who vows to keep it soft.
Swell wind-chests are re-actioned during Symposium session.
Restoration begins on Solo Mixtures at top of chamber. Project is half-completed and work resumes in 2019.
Cymbal-star is presented to the Organ by Bob Knight in memory of Virgil Fox and to mark the Organ’s centennial.
32′ Metal Diapason reactivated.

Larry Trupiano restores mixture in Great Division and adds tuning slides to a resource damaged by cone tuning.
Vox Humana Pedal returned to use in String Division.
Restoration needs of the Orchestral Division assessed.
Work continues on piano.
Carl Loeser installs top notes of Ethereal Clear Flute.
Plans to focus on the Orchestral Division announced.
Console combination action improved with new gaskets with ports of the needed size to insure air-tightness installed under each magnet by Curt Mangel. System is tested by having every other stop on, then alternating with the opposite pattern.
Entire Swell plays again for the first time in about 10 years.

The first weeklong Friends Symposium Program opens as numerous experts donate their time to restore the String organ expression shades and address numerous issues with pipes, winding and finishing together with the curators.
Music in the Marketplace, the story of the Wanamaker Organ published.
Echo Division restoration completed. Peter Conte finishes playing the Wagner “Pilgrim’s Chorus” from measure 43.
Ethereal Division comes back on line in November.

Work continues on Echo and Ethereal and console shoes are wired in.
Mechanisms are installed behind some stop tablets and the crescendo shoe is taken down for restoration.
Great relay is restored.
Extensive wiring carried out, particularly in the Echo.
Pipes are returned to the Ethereal.

January 4: Hecht’s closes for renovations as a Strawbridges.
The fourth and Fifth floors of Grand Court are enclosed in glass. The Store itself is reduced to three floors from five.
Main Organ is meticulously covered in plastic to keep dust out of the Organ. Theft precautions are taken for demolition areas.
Lord & Taylor cleans organ case and restores show-pipes as it begins retailing after a period when the Store was closed and new escalators were installed.
Preliminary work done on Echo chamber. Console work continues with restoration of stop manifolds and wiring.
Rubber membrane installed in Ethereal chests and windlines.
August 6: Store reopens amid Grand Court ceremonies as a Strawbridges.
AGO Announces 2002 Philadelphia Convention.

Steel bracing put under console to allow it to pivot.
February 14: A worker knocks an elbow off a sprinkler pipe on an upper floor undergoing renovation, thoroughly drenching the Echo organ below and sending water dripping from its chamber floor into the Grand Court. Ultimately an insurance liability policy funds this restoration.
729 sets of stop pneumatics restored by Anthony Bufano, curator of the Riverside Church organ.
Restorer James Breneman dies suddenly after fifteen months of service as a contractor. During his involvement he rebuilt two suction reservoirs for the console, four reservoirs in the Solo, two in the Orchestral, one for the Ethereal, and two for the Great Chorus, and rerouted winding to the String Contra Diaphone (made necessary by the new String blower not providing adequate pressure).
Planning for a Friends of the Wanamaker Organ society begun, with a first meeting in October in the choir roomof St. Clement’s Episcopal Church.
Combination-action cabinet built by carpenters.
Hesco re-engraves console stop tabs as necessary.
Stop rail above top keyboard completed but not installed.

January 19: Announcement made that the Organ will be silent until May during the console restoration. Console completely apart in August.
November: Store asks that the organ be made playable for the Christmas season. A Kimball theatre-organ console is placed on the third floor, directly above the present console loft, with three stop keys, one for each tutti-board setting.
Main blower restored to operation by independent contractor.

Store auctions or gives away Wanamaker flags, liturgical vestments and other materials from the Store attic. Archives given to the Historical Society of Pennsylvania. Wanamaker’s office catalogued and dismantled and given to the HSP>
Wanamaker Organist Keith Chapman and his wife Sally are killed when their private plane crashes in the Colorado Rockies; Peter Richard Conte appointed his successor. Console restoration begins.
Upper two floors of Grand Court are enclosed in glass. First full year of Wanamaker Building renovations.
Store income drops from $100 million to $65 million it is later revealed. Store chain put up for sale but offer withdrawn.
Building construction dust gets in organ blowers and into chests.
Demolition work results in severing of Echo Organ cable. Peter Richard Conte is at measure 42 of Wagner’s “Pilgrim Chorus.”
Nov. 30: A stuck valve admitting water to the Ethereal blower sends water through a telephone trough to the Ethereal chamber below, thoroughly soaking the chests and pipes. Curators are unable to see what is happening because uppermost floors are accessible only by an exterior scaffolding elevator on 13th Street. Huge fans are set up to dry the chamber. Woodward & Lothrop chairman Robert Mulligan declares that all damaged divisions of the Organ will be restored.

Chuck Gibson leaves employ as Assistant Curator to continue his own business.

Store renovations begin in summer. Plans for the organ include new String and Ethereal blowers because the space they occupy on the 8th floor is to be used by offices. The old Welte combination action is removed to meet needs of the new building design, giving impetus for funding for a new electronic combination action. This provides added impetus to restore the console so the pneumatic action can move the stops.

John R. McCormack retures and Nelson E. Buechner is promoted to Curator. Perflex starts failing. String Organ is redone in leather and Orchestral bottom boards are taken down in preparation for releathering. Chuck Gibson hired as Assistant Curator to Nelson E. Buechner and joins him in experiments on Perflex removal, which proves time consuming and difficult.

Curator John McCormack connects a relay to select stops of the Ethereal Division to allow Keith Chapman to switch solo stops with pistons. Perflex artificial leather installed on String and Orchestral pouchboards about this time.

All new electric relays placed in the String Organ.
Gongs removed from storage above Solo Organ and installed.
Three Orchestral reeds moved to High-Pressure Swell, replacing Bass Trombone 16, Bass Tuba 16 and Tuba 8′. The stored pipes,were intended to be relocated elsewhere (whether under expression or not had not been decided). They later suffered damage from prolonged storage. This arrangement was reversed in the 1990s

In August on a Saturday when the Store was closed, a water pipe in an air-conditioning unit on the fourth floor broke, and ran unckecked for several hours through a trap door in the floor. Much of the Orchestral, Great , Choir and several stops of the Main Pedal were soaked and one large regulator had to be torn apart and completely rebuilt. Fortunately the electrical and relay systems were spared. In spite of the damage (which was subsequently corrected), the Organ played on Monday when the store opened.

Assistant curator Henry A Backer, who joined the staff in 1929, leaves the company

The Friends of the Wanamaker Organ-sponsored Symphonic Organ Restoration Symposium brings many of the Nation’s top pipe-organ restorers to Philadelphia for intense educational courses and workshops on fine the art of historic electropneumatic pipe-organ restoration. Top practitioners share the special techniques they have devised to keep the country’s great Symphonic pipe organs a vital presence on the American scene.

L. Curt Mangel, curator of the Wanamaker Organ and former curator of the famous Sanfilippo Collection of historic automated musical instruments in Barrington, Illinois, is the Symposium organizer. Evening and weekend educational field trips are occasionally included, taking participants to prominent pipe-organ and related sites in the greater Philadelphia area.