During Lent and Easter paintings of the Passion of Christ by the celebrated Hungarian painter Michael de Munkacsy were hung in the Grand Court.  These paintings had been sent on an international tour following their completion and thousands paid admission to see them. Leading newspapers and clergy were profuse in their praise of the characterizations. So precious were these paintings to John Wanamaker that he paid the highest price received by any living artist to date (estimates vary from $100,000 to .$175,000 each). Before 1908 they hung in his country home Lindenhurst. When that home burned to the ground in 1907, neighbors cut them from their frames and rescued them. After Mr. Wanamaker’s death the paintings were hung in the Grand Court annually and were displayed at the New York 1939 and 1964 World’s Fairs, before being sold in 1988. Choirs and orchestras frequently played special programs of sacred music during this period. 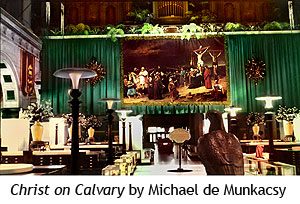 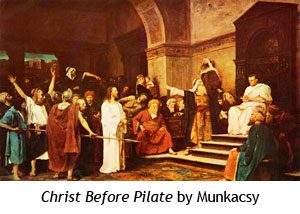